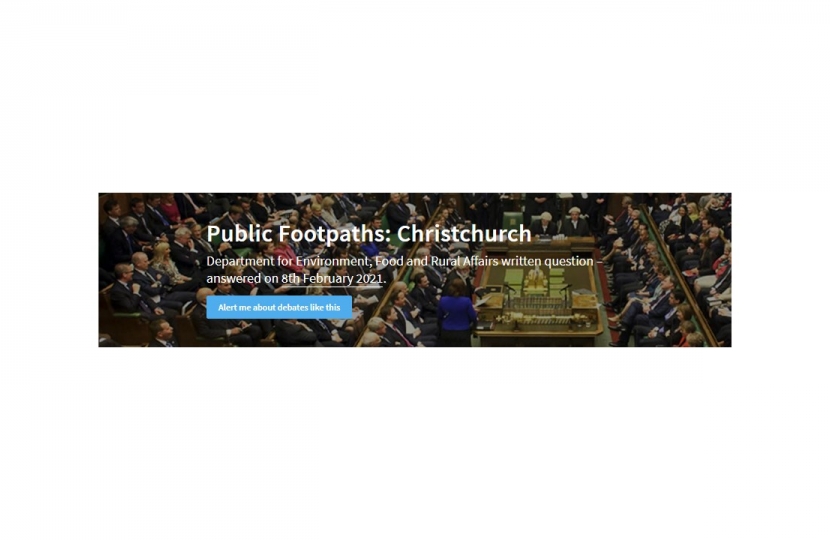 Written question to the Department for Environment, Food and Rural Affairs regarding Public Footpaths in Christchurch

To ask the Secretary of State for Environment, Food and Rural Affairs, what action he is taking to ensure that coastal paths being established under the Marine and Coastal Access Act 2009 incorporate ferry connections; and if he will ensure that the proposed coastal path between Mudeford and Hengistbury Head uses the route provided by the Mudeford ferry, taking into account the ferry times for 2021-22 as updated with effect from 1 February 2021.

Rebecca Pow The Parliamentary Under-Secretary of State for Environment, Food and Rural Affairs

Natural England’s 2013 Approved Coastal Access Scheme sets out the criteria under which decisions regarding estuarial discretion are made. The Scheme is clear that the presence of a ferry service must be taken into account in such circumstances. This must, however, also be weighed alongside other determining factors such as public enjoyment and the coastal nature of an estuary.

The proposals for Kimmeridge Bay to Highcliffe in which the Mudeford Ferry sits were published on 21 June 2017. A decision regarding this Coastal Access Report has been delayed, however, due to the European Court ruling known as People Over Wind. Natural England is reviewing the relevant Habitats Regulations Assessment in compliance with this ruling. In addition, a number of objections were received following the publication of Natural England’s initial report. Defra has appointed an independent planning inspector to examine these objections who will provide a report to the Secretary of State.

This evidence and the Planning Inspectors Report will need to be considered as part of the Secretary of State’s decision on the proposals.

Natural England continues to monitor the local situation and any changes since the report was published, for example updates to the ferry timetable, will be taken into account.