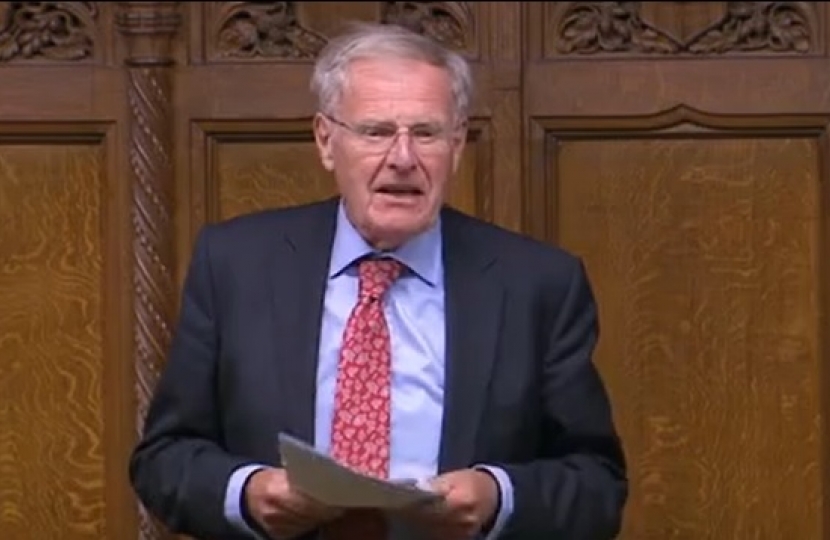 Please see below the text as taken from Hansard of Sir Chris's question in the House of Commons during the Public Health Debate:

The logic of what Justin Madders has just been saying is that the Opposition should be opposing the regulations and calling upon the Government to come back with a fresh set of regulations that overcome the shortcomings he has so articulately identified. I, for my part, certainly hope we will have an opportunity to test the will of the House on the regulations, because this is the first freedom we have been given on such regulations for months. I hope we can then get the Government to go back to the drawing board and come forward with regulations that are consistent with their other policies elsewhere in the country.

These are complex regulations. Big Brother Watch has quoted human rights barrister Adam Wagner, who said that these are

“the most complex and convoluted set of lockdown regulations on England yet.”

That is hardly simple regulation, is it? We know that the Home Secretary herself was caught out and unable to give a convincing answer to the question of what was defined as mingling.

In the time available, I am going to say that I agree absolutely with the criticisms that have been made about the definition of families and young people, but I want to concentrate on another big anomaly in these regulations, which is that they apply equally to gatherings inside and outside. Why do they do that, because that is completely inconsistent with the Government’s own advice to themselves? It is also inconsistent with the advice even coming from Professor Lockdown, who on the radio this morning was absolutely clear that the risks from the virus were much greater in an indoor setting than in an outdoor setting. So these regulations are arbitrary, unfair, unjustified by the evidence, unenforceable and counterproductive in undermining public confidence in Government and in the rule of law.

In the interview on the “Today” programme this morning with Professor Lockdown, he was asked about the contrast between what we are doing and what people are doing in Sweden. He said that, of course, there was not much difference in the issues about social distancing and compliance, but what was important was that in Sweden the people trusted the Government, and that is why they have been able to manage with far less in terms of regulation. If I had the chance to speak to Professor Lockdown, I would have said that actually what he should have been saying was that our Government should be trusting the people. I think the Swedish Government are trusting the people and the people of Sweden are responding positively, enabling Sweden to have a much more thriving economy than ours because they have not got so many arbitrary restrictions imposed upon them. I hope the message that the Minister will take back is that we should be looking at this in terms of trusting the people and applying common sense, and a lot of these regulations manifestly do not achieve that objective.

These regulations were brought in on a whim. They must have been drafted over a period of weeks, I would suggest, but after the Prime Minister made his statement to a press conference on the Wednesday and the Secretary of State made a statement on the Thursday, I raised a point of order on the Friday to ask, “Where are these regulations because they are coming into effect on Sunday evening?” In the end, they were not laid in this House until 10.30 am on the Monday morning. That is absolutely intolerable. The justification given in the letter that was sent, as all letters have to be sent by the Secretary of State if the Government are ignoring the rules of this House, by the Secretary of State for Health and Social Care was that these amendments were so urgent that he had not got time to bring them in earlier, but he said in the last paragraph, “I hope you understand why we proceeded in this way, and I look forward to working with you to strengthen parliamentary scrutiny of these measures in future.”

The Minister who has been charged with dealing with this debate, despite the fact that these regulations were brought in by the Home Office actually—the Home Secretary introduced these regulations—could not answer my right hon. Friend Sir Desmond Swayne as to whether there were going to be powers of entry, arrest and so on. I am sure a Home Office Minister would have been able to do that, but what that underlines is that we are talking about draconian powers that are restricting the liberty of the British citizen. We should not be introducing draconian powers without the strongest possible justification, and I do not think the Minister has set out any justification in her remarks.