Sir Chris's Questions During the Courts and Tribunals Recovery Debate 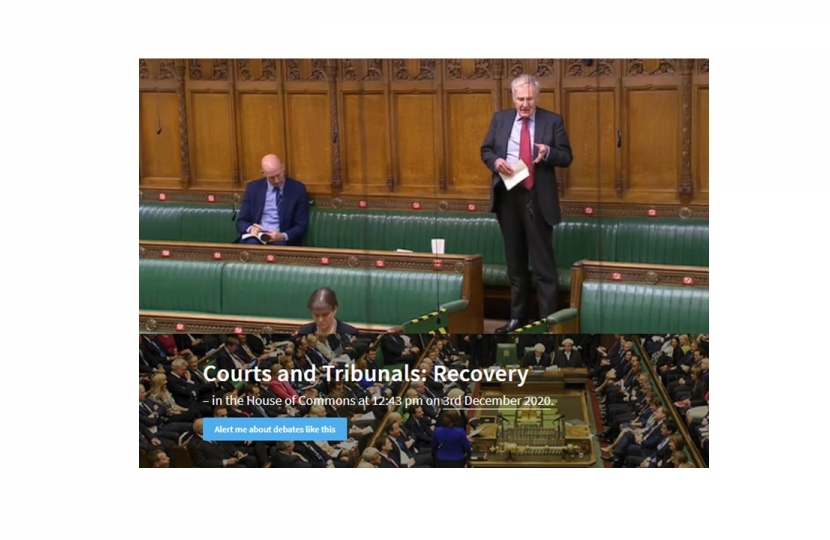 Please see below the text (IN CONTEXT) as taken from Hansard of Sir Chris's questions during the Courts and Tribunals Recovery Debate:

Can I join the Lord Chancellor in paying tribute to magistrate colleagues in court, particularly in Cheshire and Merseyside, who have continued to sit right through the pandemic? Could I ask my right hon. and learned Friend to give us an update on plans to extend the retirement age of magistrates, and also on the work that local advisory committees are doing to recruit new magistrates to the bench?

Robert Buckland The Lord Chancellor and Secretary of State for Justice

I am grateful to my hon. Friend, who I know takes a particular interest in this matter. He is right to pay tribute to the magistracy and, indeed, to highlight the recruitment campaign that is currently ongoing. I would urge members of the public who want to take part and to be part of the system to make such an application. On the retirement age, the consultation has now concluded. I am considering its findings, and I will report back to the House as soon as possible.

Following on from the answer that my right hon. and learned Friend gave to our hon. Friend Andy Carter, will he tell us when he is going to make his response? I have a private Member’s Bill down for 29 January and it would be useful to have had a response from the Government, preferably before the end of this year, so that we can draft a Bill appropriately.

May I also ask my right hon. and learned Friend about the attitude of the Bar? We have read reports that barristers are planning to go on strike, because they do not like the idea of having to work longer hours. Will he condemn any such behaviour?

Robert Buckland The Lord Chancellor and Secretary of State for Justice

I thank my hon. Friend for taking such an interest in the magistrates’ retirement age. I undertake that I will work in a way that means we may dovetail our separate efforts with regard to his private Member’s Bill. I will come back to him before then.

With regard to my colleagues and friends at the Bar, a consultation is going on about covid operating hours to allow the courts to sit for two sittings a day in some court centres. I will await the outcome of the consultation—it is only right for me to do that—but may I appeal to the better angels of our nature on court recovery? Those at the Bar are doing a tremendous job—let us stay positive and stick together, and we will get this sorted.