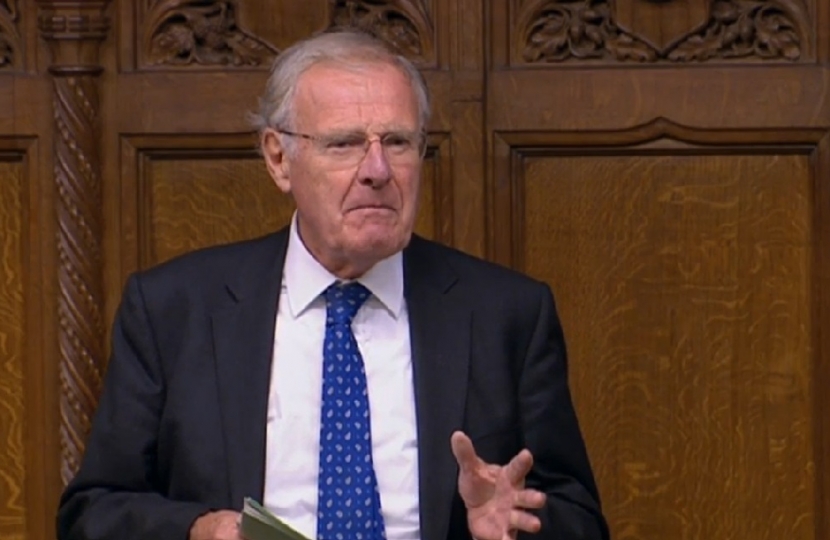 Please see below the text as taken from Hansard of Sir Chris's supportive comments in the House of Commons during the Animal Welfare (Sentencing) Bill:

It is a pleasure to follow my hon. Friend Neil Parish. I congratulate my hon. Friend Chris Loder on his success in his first ever private Members’ Bill ballot and on having chosen a subject that is obviously dear to the hearts of so many of our constituents and to those of so many hon. Members.

Sometimes, Madam Deputy Speaker, people say that a Bill that has universal support and nobody opposed to it ought to be allowed to go through on Second Reading on the nod, but as you know, I have always been against that proposition. Today demonstrates why that is a bad proposition, because however good or popular a Bill is, it is always better for it to be properly debated and scrutinised on Second Reading, and that is what is happening today.

Kerry McCarthy thinks that the fact 32 Back Benchers are wishing to speak on this Bill has something to do with the Government not being too enthusiastic about some of the Bills later on the Order Paper in my name. I am assured by the Government Whips that that is not true at all. Indeed, if one looks at the Bill that is due to follow this one—the Mobile Homes Act 1983 (Amendment) Bill—it is actually four-square in line with Government policy. It would be very interesting if the Government actually oppose a Bill that they are already committed to introducing when there is parliamentary time. I mention that because if some of my hon. Friends think they are doing the Government’s bidding by speaking for unnecessarily long in this debate, all I can say is that I am not sure that is actually what they are doing, because the Government have assured me that they support the provisions of the second Bill, but leave that as it may.

My daughter is a vet. I obviously take a lot of parental responsibility, and we must have been very good on animal welfare when we were bringing her up. As we have, she, with her husband, also has rescue dogs. They are rescue Staffies, which seem to be among the worst breeds for the suffering they often undergo in their lives.

It is important that we do not mislead the public and raise expectations beyond what is reasonable. That is why I made the intervention I did on my hon. Friend the Member for West Dorset. In the correspondence we have received from the animal charities and in their campaigning, they are almost implying that there are people who are against this measure, but I have yet to find anybody who is against it. Those animal charities seem to be using this as a means to try to raise money for their own causes, and that is fine—they can raise money if they want to—but to raise expectations that this will somehow be a panacea for improving animal welfare is going slightly over the top.

Indeed, half of my hon. Friend’s speech was about all the things that he could have put into his Bill, but it is implicit that he did not put them into his Bill because he was told by the Government that if he did so, his Bill would not get Government support, and I sympathise with him on that.

I would just like to say for the record that I did not ask the Government to put those matters into this Bill, because I know full well that they are matters to come forward—with, I hope, the support of my constituency neighbour, my hon. Friend Neil Parish—when we can address some of these difficult matters of animal sentience properly, rather than just in this Bill. If I may, I just want to make the point that I am afraid what my hon. Friend Sir Christopher Chope said was not correct: it is not the case that I asked the Government to do that and that they refused.

I am most grateful to my hon. Friend for putting that fair and square on the record. So he exercised self-discipline, and I must congratulate him on that. We will live in hope, as the hon. Member for Bristol East said, about when, if ever, the Government bring forward some of the other measures that she and, indeed, my hon. Friend talked about.

The Bill leads people to believe that our prisons will be filled up with a lot more people who are guilty of abusing animals. The explanatory notes are not just notes made up by my hon. Friend the Member for West Dorset. They come with the authority of the Department for Environment, Food and Rural Affairs, which provided them. They explain what each part of the Bill will mean in practice and provide background information on the development of policy.

Does the hon. Gentleman not agree that it is about not so much putting people in prison, but trying to stop them doing these crimes in the first place?

Absolutely. I agree that the deterrent effect of legislation is a very important aspect of it. However, there is nothing clear as to what the evidence is on that. One of the shortcomings of private Members’ Bills is that there are no procedures to enable us to have a regulatory impact assessment. We would not have known about the financial implications of the Bill unless they were set out in the explanatory notes.

Like my hon. Friend, I support a strong legislative framework and good laws, having attended the same university as him, the University of Dundee—Queen’s College as was. Does he agree that the Bill still represents a step-change in the way that we treat animal welfare in this country and that any improvement in the sentencing framework has to be a positive thing?

Obviously, I accept that raising the maximum penalty from six months to five years is quite a dramatic change, although it is significant, as is clear from the notes, that the Government could have doubled it from six months to one year if they had implemented section 281(5) of the Criminal Justice Act 2003. That could have been done years ago. It still has not been done and perhaps the Minister will address that issue in her remarks.

I am not suggesting that the Bill is not better than nothing, but I am suggesting that it is being used to suggest that there will be a lot more people sent to prison as a result, and the reality of the policy is that there will not be any more people sent to prison, but that those who are sent to prison will be sent for longer periods. That is what it says here. That will be very welcome and the increase in the maximum penalties will be part of the deterrent process, but how many more people will be sent to prison? We know that they say the cost will be £500,000 per annum. As it costs about £45,000 a year to keep somebody in prison, we are talking about between 10 and 12 persons in prison per annum as a result of the Bill.

I thank my hon. Friend for indulging me a second time. To use the technical legal term, I believe the best way to see whether that would actually happen is to “suck it and see”. I have some sympathy for what he says about a legislative impact assessment. If he wants to bring forward a private Member’s Bill on that, I would be inclined to speak to it.

Well, that is another one on the agenda for the next Session of Parliament, Madam Deputy Speaker.

I will just conclude by saying that there is another element to this: the Sentencing Council guidelines for dealing with animal welfare offences. They say that a period of imprisonment should be merited only in the most serious offences. My concern about the Sentencing Council guidelines—perhaps the Minister could address this, too—is that they constrain the ability of magistrates in particular to impose the penalty that they think is appropriate, having regard to all the circumstances. If this House decides, as it wants to do today, to impose a maximum sentence of five years, is it reasonable for the unaccounted people who deal with the sentencing guidelines to bring in guidelines that suggest that there should not be many penalties of five years imposed by the Crown courts? So we have a real problem: the legislature has ceded control, or a significant part of control, over sentencing to the Sentencing Council.

I am not expecting them at all. I am criticising the fact that they are no longer just regarded as guidelines, but accepted by many magistrates and judges as tantamount to instructions. If my hon. Friend looks at the sentencing guidelines for animal welfare, which I commend to him, he will see that they are not that specific, but they do give some general parameters that place constraints on the discretion of magistrates. The current guidelines impose severe constraints on the magistrates’ ability to impose an immediate custodial sentence for any offence of breach of animal welfare. That is another issue that needs to be raised.

We need to work with public opinion on that and not allow the public to be disappointed. They should not think that we are offering a panacea for improving animal welfare and reducing animal cruelty. Let us hope that the Bill does deter some of the most heinous offences, but let us not think that it is the full answer to all the problems