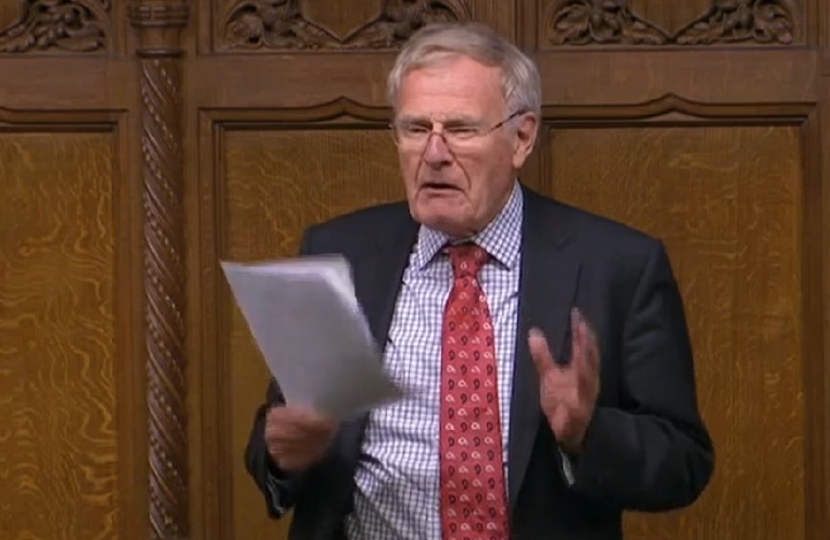 Please see below the text as taken from Hansard of Sir Chris's question in the House of Commons during the Covid19 Debate:

I have said it before and I say it again: lockdowns, whether they are partial or total, are the wrong strategy. They are oppressive and profoundly unconservative. As a Conservative, I have always believed that the role of the state is to provide a safety net for those who cannot help themselves. Now we have a Conservative Government who are preventing people from helping themselves by engaging in economic activity, and, having prevented those people from engaging in economic activity, the Government are not providing a safety net to all of them. As Munira Wilson has just said, people are missing out because they are not allowed to engage in economic activity. In my Constituency, people who work on cruise ships, people who work in the events industry and people who run luxury coaches are but three examples of the terrible cases that have come to my notice in recent days.

In their actions, the Government are treating citizens not as individuals but as part of a collective, and that is depersonalising. It is most obvious in the Government’s refusal to differentiate between those who have had covid-19 and are therefore immune, whether in the short or long term, and those who have not. If the state wanted to maximise liberty, it would remove the restrictions on freedom wherever it was possible so to do. What threat is there to public health from allowing those who are immune to covid-19 to go about their normal business? That is what happens in Sweden.

I asked the Secretary of State about that in a written question, but I have not had a reply, even though I referred in the debate on 13 October to that failure to respond. I am afraid that that is indicative of the Government’s arrogance in this respect. In that debate, I also mentioned the number of deaths in Sweden. I have looked up the latest figures, and there have been two deaths in Sweden from covid-19 in the last five days. Sweden allows much more social activity than we in this country have done, and its Government rely on individual citizens to trust each other. Sweden’s citizens trust the Government, because the Government trust them. Why can we not do something similar?

We have heard the scaremongering, and the Department refuses to justify some of its most alarmist rhetoric. The Secretary of State for Health and Social Care said on 1 October that

“hundreds of thousands of deaths…would follow” if the Government

I asked if he would publish the evidence in support of that statement. He has failed to do that—because, I suspect, there is no evidence in support of that statement. That was gross scaremongering. Instead of trying to build people’s confidence to engage in economic and social activity, the Government are actively frightening them. All this talk about long covid is also designed to try to frighten people, rather than addressing the collateral damage that the Government’s oppressive measures are causing.

Sir Chris asks the Secretary of State for Health and Social Care a Covid vaccine risk assessment question in the House of Commons.