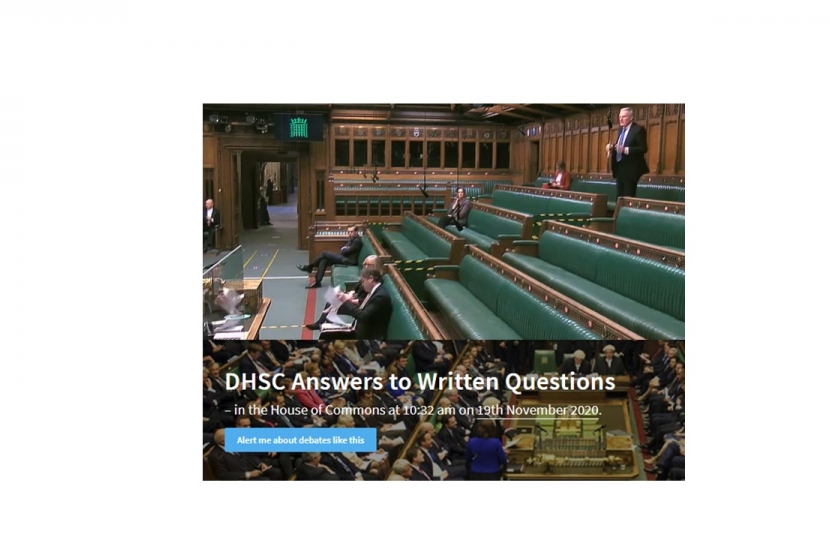 Please see below the text as taken from Hansard of Sir Chris's "Urgent Question" in the House of Commons to improve the speed and content of answers to Written Questions from the Department for Health and Social Care:

(Urgent Question): To ask the Secretary of State for Health and Social Care if he will make a statement on his Department’s performance in answering written questions from right hon. and hon. Members.

Parliamentary questions are a key element of Parliament’s ability to scrutinise Government on behalf of the people of the United Kingdom. As the House would expect, we take them very seriously, and as you, Mr Speaker, and hon. Members will know, I take seriously all aspects of my and the Government’s accountability to this House. Prior to the pandemic, my Department had an exemplary record of providing accurate and timely answers. In the last full parliamentary Session, despite receiving more PQs than any other Department, we had the highest response rate in Whitehall. However, as hon. Members will be aware, DHSC, its Ministers and officials have been at the forefront of responding to this pandemic, with the attendant additional workload that has brought.

As such, it is a matter of regret that we have been unable to sustain previous PQ performance, for which I rightly apologise to you and the House. However, it is explicable in the face of a trio of concurrent challenges. The first is volume: between March and October this year, we received over 8,000 written parliamentary questions across both Houses. This compares with 4,000 for the equivalent period last year. The second challenge is timeliness: we have met a rapidly, almost daily, changing situation, and answers drafted by officials are sometimes out of date shortly after they are drafted. We have been prioritising accuracy of response to Members over speed, but this can mean that responses have to be redrafted, with attendant delays.

More broadly, throughout this challenging time the Secretary of State and Ministers have sought to make themselves regularly available in the House to be questioned and held to account. Between March and October, the Secretary of State made 18 statements and answered seven urgent questions. We have also seen seven general debates on covid since March, and that is not including junior Ministers’ appearances in the Chamber. This is not an alternative to written parliamentary questions, but it is an important reflection of our accountability to this House.

To conclude, written parliamentary questions will continue to be a top priority on which I am briefed weekly. I thank you, Mr Speaker, and hon. Members for your and their patience and recognition of the exceptional circumstances of recent months. In the weeks and months ahead, we will work hard to restore our leading performance, which hon. Members have a right to expect.

Thank you, Mr Speaker, for granting this urgent question, which was born of extreme exasperation. I thank my hon. Friend for his response, his contrition and his apology, and for his offer to do better in the future.

If other Departments can answer 90% of named day questions on time, why cannot the Minister’s? Will he set a date for the clearance of the backlog to which he referred and guarantee future compliance with the rules and the spirit of the rules? This is not just about timeliness; it is about the quality of the answers. Since this is the week of resets, will the Minister now tell his ministerial colleagues and officials to abandon their tactic of, basically, dumb insolence towards those of us who ask challenging questions?

Does my hon. Friend accept that these questions and answers increase public trust in our democracy, and should be a catalyst for improving public policy? If his Department is in the lead in suppressing liberty in this country, is it surprising that there are more questions to his Department than to others? Because issues of liberty are at stake, surely it is all the more important that these questions are answered quickly.

I am grateful to my hon. Friend. As he will be aware, other Departments, while they have heavy workloads, are not leading the response to the pandemic. In response to his final point, he will not be surprised that I do not characterise it in that way. Instead, I would characterise it as the Department of Health being in the lead in saving lives and protecting the NHS in this country.

My hon. Friend asked two other substantive questions. I think his language was a little intemperate in respect of the serious efforts that officials undertake every day to try to provide accurate and timely answers. There is no suggestion that they seek to stonewall or to avoid responding. They do their best, but it is difficult and the situation changes day by day. Where answers are deemed to be inadequate, hon. Members often revert to me directly or table their questions again, and we endeavour to fulfil our obligation to provide accurate answers.

On my hon. Friend’s question about recovery, we have set a trajectory for each month in order to recover performance over the coming months. Of course, that depends to a degree on the workload of officials in responding to the pandemic, as well as in providing answers, but I do not see it as an either/or; we intend to recover performance in parallel with tackling the pandemic.

I thank the Minister for his response and for the hard work he and his Department put in. However, as he acknowledges, the performance here, like in so many other areas, is just not good enough. We know it is tough, but there comes a point when it begins to look like departmental scrutiny is being used as a cover for evading giving answers.

This morning, I looked at the Department’s response times to my own written questions over the past six months. I have had to wait over one month for an answer 29 times, over two months 11 times and over three months four times. I was actually thinking of putting in a question asking for the average response times to questions, but then I thought I would just be waiting a long time for that answer as well. I have even had to wait five months for the answer to what I thought was a pretty simple question asking what tests for covid-19 had been used. One hundred and sixty-eight days later, I received the utterly unrevealing answer:

“A large number of different tests have been used throughout the programme.”

I was lucky; my hon. Friend Gill Furniss waited 18 weeks for an answer to a question on tests, only to be told:

“The information is not held in the format requested.”

Why did it take so long just to say that? Do Ministers even read the answers that they sign off?

This is not just about the time; the quality of the answers that we get back also needs improving. On dozens of occasions, I have been told that the Department does not hold the data, or no real attempt is made to answer the question that was asked. I accept that sometimes that information may not be easily acquired, but too often it looks as though the Department wants to keep us in the dark. I remind the House that the ministerial code requires Ministers to be

“as open as possible with Parliament”, even when that may be inconvenient to them. In the spirit of openness, will the Minister also look at restarting NHS England and NHS Digital publications?

In conclusion, we all understand that the Department is dealing with many pressing issues, but scrutiny is important. Accountability matters, and if the pandemic is used too often as an excuse for standards to slip, that is how we go from questions not being answered to major policy changes being announced by media leaks, until we end up with the shameful spectacle of spivs and cronies pocketing millions from PPE contracts. Government must do better.

I was going to say that, as ever, I was grateful to the hon. Gentleman for his tone, right up to almost the end of his remarks. On his substantive points, when it comes to accountability to this House, he will know from our regular double acts at this Dispatch Box and in Committee that I and fellow Ministers do not shy away from our accountability to this House in all its forms.

On volume, as I have said, during the same period last year we received 4,000 written questions; this year, the figure has been 8,000. That cannot be addressed by increasing administrative resource alone, because the technical expertise of policy experts is required to provide accuracy in the answers that the hon. Gentleman and other hon. Members seek. The same policy officials are dealing, day to day, with all aspects of the response to the pandemic.

The hon. Gentleman talked about accuracy, and he is right about the importance of accurate and timely answers. Given that we have answered 8,000 parliamentary questions between March and, I believe, October, some may, sadly, not live up to his expectations. I know that he will hold me and other Ministers to account when that is the case.

In answer to another of the hon. Gentleman’s question, yes, I and other Ministers read not only the answers and the questions, but the background to those questions. If we do not, we will quite rightly end up at the Dispatch Box, being asked those questions again and being challenged on the Floor of the House. In view of that, and in view of our obligations to the public and under the ministerial code, it is absolutely right that we take the answering of written parliamentary questions very seriously.

On the hon. Gentleman’s final point about NHS Digital and the publication of data and so on, I am happy to take that away and look at it for him.

I thank my hon. Friend for his answer to my hon. Friend Sir Christopher Chope, who is a fellow member of the Procedure Committee. I was pleased to hear the Minister say that the Department takes the answering of questions seriously, because the answering and the monitoring of written questions and correspondence from MPs will help Ministers to identify problems in the implementation and roll-out of their policies.

The Procedure Committee, which I chair, has shown some leeway to the Department in recognition of the pressures that it faces, but I invite my hon. Friend to come to the Committee in the next few weeks to explain how he is going to address the backlog.