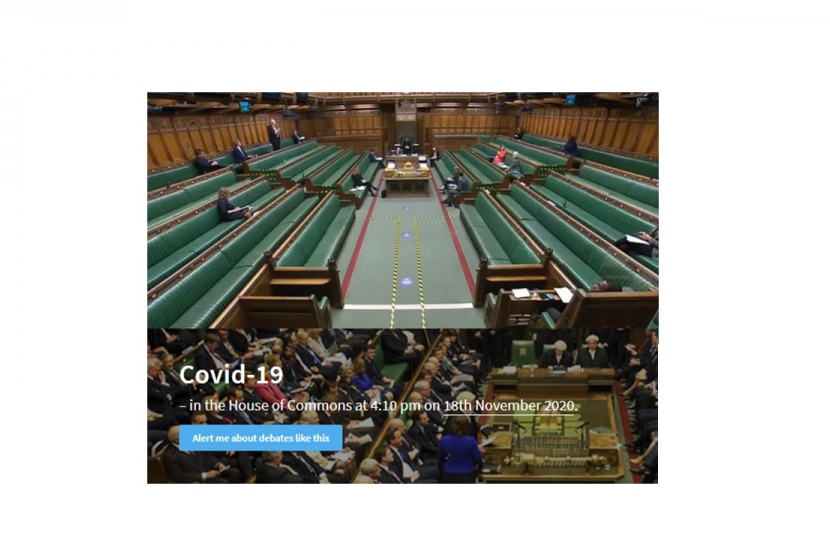 Please see below the text as taken from Hansard of Sir Chris's statement in the House of Commons during the Covid19 Debate:

The Minister referred to evidence, data and scientific advice as being the watchwords of the Government. Those words ring rather hollow with my constituents, because they regard that as spin rather than substance. Earlier today, I suggested to the Prime Minister at Prime Minister’s questions that the million-plus people who had tested positive for covid-19 and had recovered should be exempt from the regulations because their T cells would give them immunity for at least six months. That is the evidence provided by and published in The BMJ, and yet the Prime Minister seemed to cast doubt on it, despite the fact that that evidence was produced in collaboration with Public Health England and has won plaudits from the Medical Research Council.

One of the advantages of providing such an exemption is that it would deal with the people who are suffering from long covid, to whom the Minister also referred. In Sweden, they apply such an exemption. I know that any references to Sweden are anathema to the Government. Last time I mentioned Sweden, the Minister tried to pour cold water on my statistics. She was wrong, and I questioned her and have not had an answer. Again, I make no apology for referring to the comparable statistics.

In the past week, ending 17 November, there have been 85 deaths from covid-19 in Sweden. In the similar period in the United Kingdom, there have been 2,975 deaths. Taking into account the population difference, there are six times as many deaths per capita in this country as in Sweden, and that takes no account of all the collateral damage that we are causing to our people who cannot get access to healthcare, including 5,000 excess deaths from heart disease alone.

The Minister was saying that we talk about evidence. In answer to parliamentary question 111413, asking about the public health justification for refusing to allow the giving and receiving of the sacrament in places of worship, this is the answer I received:

“Public Health England had not been requested to research and publish detailed specific data on the numbers of COVID-19 cases related to place of worship and allied settings on outbreak investigation. This is now being performed.”

That answer came in 10 days after it should have done, but why was that work not done before? Why are we refusing to allow people to receive the sacrament in places of worship without any evidence in justification? Similarly, I asked about the difference between two people playing golf on a public golf course and two people walking a dog on a public footpath. There was no satisfactory response from the Government.

On another issue, while the Government say that people are at great risk if they go to play golf together, the greatest risk, it seems, is to have the misfortune to go to hospital and then contract covid-19. In answer to a question yesterday, I have been told by the Minister that in October alone there were 3,934 cases of people who went to hospital without covid but got covid while they were there, as a result of hospital transmission of infection. In October, in Poole hospital, which serves many of my constituents, 120 people were in hospital, and some 73 of them contracted covid as a result of infection within the hospital.

The question I ask of the Minister, therefore, is: when we get the vaccination, will someone getting a vaccination automatically be exempt from the lockdown rules? If not, why not? Also, when we get into discussing criteria for moving out of the lockdown, what will we do about false positive tests? If there are 500,000 tests a day and 5% are false positives, we will have 25,000 false positives. That is number enough to justify a continuation of lockdown—based on false tests. Surely that cannot be sensible policy for the Government.