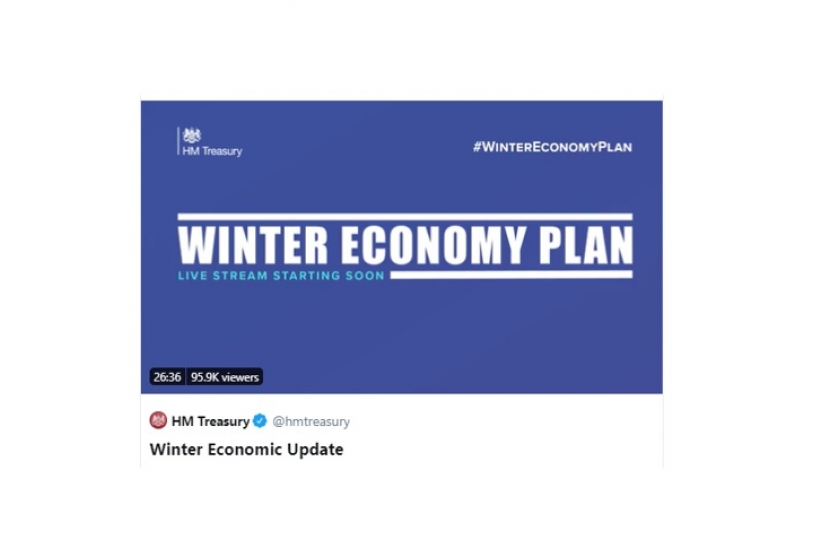 The Chancellor of the Exchequer, Rishi Sunak has today launched his Winter Economy Plan, our economic response to the Coronavirus pandemic for the coming winter.

Read below his speech in full:

Mr Speaker,
‍
Thank you for granting me permission to make this Statement to the House today.
‍
Earlier this week the Prime Minister set out the next stage of the government’s health response to Coronavirus.

Today I want to explain the next phase of our planned economic response.

The House will be reassured to know I have been developing plans to protect jobs and the economy over the winter period.

Plans that seek to strike the finely-judged balance between managing the virus and protecting the jobs and livelihoods of millions.

I know people are anxious, and afraid, and exhausted, at the prospect of further restrictions on our economic and social freedoms.

I share those feelings, but there are reasons to be cautiously optimistic.

We are in a fundamentally different position than we were in March.

And we now know much more about this virus.

Public awareness of the risks, and how to mitigate them, is far greater.

And we have met our promise to give the NHS whatever it needs, with significant new funding for NHS capacity, for PPE, and, I can inform the House today, we have now provided over £12 billion for test and trace.

In economic terms, while our output remains well below where it was in February, we have seen three consecutive months of growth.

And millions of people have moved off the furlough and back to work.

But the resurgence of the virus, and the measures we need to take in response, pose a threat to this fragile economic recovery.

So our task now is to move to the next stage of our economic plan, nurturing the recovery by protecting jobs through the difficult winter months.

The underlying rationale for the next phase of economic support must be different to what came before.

The primary goal of our economic policy remains unchanged: to support people’s jobs.

But the way we achieve that must evolve.

Back in March, we hoped we were facing a temporary period of disruption.

In response, we provided one of the most generous and comprehensive economic plans anywhere in the world with £190 billion of support for people, businesses and public services, as we protected our economic capacity.

It is now clear, as the Prime Minister and our scientific advisers have said for at least the next six months the virus and restrictions are going to be a fact of our lives.

Our economy is now likely to undergo a more permanent adjustment.

Above all, we need to face up to the trade-offs and hard choices Coronavirus presents.

And, Mr Speaker, there has been no harder choice than the decision to end the furlough scheme.

The furlough was the right policy at the time we introduced it.

It provided immediate, short-term protection for millions of jobs through a period of acute crisis.

But as the economy reopens it is fundamentally wrong to hold people in jobs that only exist inside the furlough.

We need to create new opportunities and allow the economy to move forward and that means supporting people to be in viable jobs which provide genuine security.

As I’ve said throughout this crisis, I cannot save every business.

I cannot save every job.

But what we can and must do is deal with the real problems businesses and employees are facing now.

In March, the problem was that we ordered businesses to close.

In response, we paid people to stay at home and not work.

Today, the problem is different.

Many businesses are operating safely and viably, but they now face uncertainty and reduced demand over the winter months.

What those businesses need is support to bring people back to work and protect as many viable jobs as we can.

To do that, I am announcing today the new Jobs Support Scheme.

The government will directly support the wages of people in work giving businesses who face depressed demand the option of keeping employees in a job on shorter hours rather than making them redundant.

The Jobs Support Scheme is built on three principles.

First, it will support viable jobs.

To make sure of that, employees must work at least a third of their normal hours and be paid for that work, as normal, by their employer.

The government, together with employers, will then increase those people’s wages covering two-thirds of the pay they have lost by reducing their working hours.

And the employee will keep their job.

Second, we will target support at firms who need it the most.

All small and medium sized businesses are eligible.

But larger businesses, only when their turnover has fallen through the crisis.

Third, it will be open to employers across the United Kingdom, even if they have not previously used the furlough scheme.

The scheme will run for six months starting in November.

And employers retaining furloughed staff on shorter hours can claim both the Jobs Support Scheme and the Jobs Retention Bonus.

Throughout this crisis, we have sought parity between employees and the self-employed providing more than £13 billion of support to over 2.6 million self-employed small businesses.

These are radical interventions in the UK labour market; policies we have never tried in this country before.

Together with the Jobs Retention Bonus, the Kickstart scheme for young people, tens of billions of pounds of job creation schemes, new investment in training and apprenticeships, we are protecting millions of jobs and businesses.

If we want to protect jobs this winter, the second major challenge is helping businesses with cash flow.

Over the last six months, we’ve supported business with tens of billions of pounds of tax deferrals and generous, government-backed loans.

Those policies have been a lifeline.

But right now, businesses need every extra pound to protect jobs rather than repaying loans and tax deferrals.

First, Bounce Back Loans have given over a million small businesses a £38 billion boost to survive this pandemic. To give those businesses more time and greater flexibility to repay their loans, we are introducing Pay As You Grow.

This means:
‍
• loans can now be extended from six to ten years – nearly halving the average monthly repayment
• businesses who are struggling can now choose to make interest-only payments
• and, anyone in real trouble can apply to suspend repayments altogether for up to six months.

No business taking up Pay As You Grow will see their credit rating affected as a result.

Second, I am also changing the terms of our other loan schemes.

To help them, I plan to extend the government guarantee on these loans for up to ten years, making it easier for lenders to give people more time to repay.

I am also extending the deadline of all our loan schemes to the end of the year. And we are starting work on a new, successor loan programme, set to begin in January.

Third, I want to give businesses more time and flexibility over their deferred tax bills.

Nearly half a million businesses deferred more than £30 billion of VAT this year.

On current plans, those payments fall due in March.

Instead, I will allow businesses to spread that VAT bill over 11 smaller repayments, with no interest to pay.

And any of the millions of self-assessed income taxpayers who need extra help, can also now extend their outstanding tax bill over 12 months from next January.

The final step I’m taking today will support two of the most affected sectors: hospitality and tourism.

On current plans, their VAT rates will increase from 5% back to the standard rate of 20% on January the 13th.

So to support more than 150,000 businesses and help protect 2.4 million jobs through the winter I am announcing today that we are cancelling the planned increase and will keep the lower 5% VAT rate until March 31st next year.

Today’s measures mark an important evolution in our approach.

Our lives can no longer be put on hold.

Since May, we have taken steps to liberate our economy and society.

We did these things because life means more than simply existing.

People were not wrong for wanting that meaning, for striving towards normality, and nor was the government wrong to want this for them.

I said in the summer that we must endure and live with the uncertainty of the moment.

This means learning our new limits as we go.

Because the truth is the responsibility for defeating Coronavirus cannot be held by government alone.

It is a collective responsibility, shared by all.

Because the cost is paid by all.

We have so often spoken about this virus in terms of lives lost.

But the price our country is paying is wider than that.

The government has done much to mitigate the effects of the awful trade-offs between health, education and employment.

And as we think about the next few weeks and months, we need to bear all of those costs in mind.

As such, it would be dishonest to say there is now some risk-free solution.

Or that we can mandate behaviour to such an extent we lose any sense of personal responsibility.

What was true at the beginning of this crisis remains true now.

And we must learn to live with it and live without fear.
‍
I commend this Statement to the House.