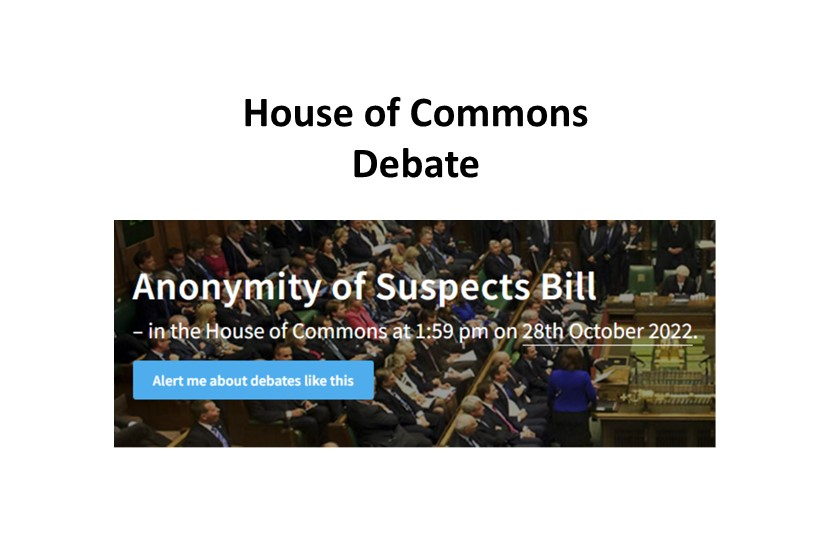 Yes, we must pass on to the important subject of the anonymity of suspects. My interest in this subject arose because I attended a meeting of a relatively new organisation called Falsely Accused Individuals for Reform at about the time that I was preparing the private Members’ Bills that I might put forward for this Session. I was impressed by what was said at that gathering because, essentially, it is a campaign by people who have been falsely accused and whose lives have been completely wrecked as a consequence.

I will read what Sir Cliff Richard said to the meeting. As hon. Members will recall, he is Britain’s all-time biggest selling male artist with, I think, 22 million singles sold. He said:

“I am pleased to support the new pressure group Falsely Accused Individuals for Reform... Being falsely accused myself and having that exposed in the media was the worst thing that has happened to me in my entire life. Even though untrue, the stigma is almost impossible to eradicate. Hence the importance of FAIR’s campaign to change the law to provide for anonymity before charge in sexual allegations and hence my continued work with FAIR in the future. Had this proposed change in the law been enacted when the police decided to raid my apartment following the allegations of a fantasist, the BBC would not have been able to film this event, name me, (even though the South Yorkshire Police had decided not to) and so plunge my life and those close to me into fear and misery.”

My hon. Friend is making an excellent point and the BBC was ticked off about what happened. What role do the media have to play with regard to the Bill, and how much accountability do they have in such instances?

Clause 2 would apply to corporations the criminality associated with premature disclosure of somebody being a suspect. Had this Bill been on the statute book when the BBC used helicopters to film Sir Cliff’s residence from above, it would have applied to the controlling forces in the BBC. I think the BBC was ordered to pay Sir Cliff £210,000 in damages for breach of privacy. It was in August 2014 that the police did that, but it took a long time for Sir Cliff to be able to clear his name. It is clear that, even now, he still bears the scars of that ordeal, which should never have happened.

This Bill is designed to prevent other people from being similarly afflicted. If somebody makes an accusation anonymously and the police act upon it and tip off the media or brief social media, they destroy the principle that people are innocent until proved guilty and should be able to enjoy anonymity until such time as they might be charged with an offence.

My hon. Friend raises the subject of anonymity. We have all seen the impact that social media abuse has on many people in the public eye, including celebrities and superstars such as Sir Cliff Richard, but also Members of Parliament, councillors and others. Does my hon. Friend agree that the issue of anonymity on social media needs to be addressed?

That is an enormous subject and the Online Safety Bill might provide my hon. Friend with an opportunity to raise it. This Bill is confined to the circumstances in which somebody is suspected of being guilty of a criminal offence and people close to the investigation abuse the process by making tip-offs and saying that they have been arrested. Quite often, they are never charged.

The trouble with all of that is that it is after the event and it is only those who are most resilient and probably very wealthy who can actually afford to engage in the litigation that might follow such events. That is why I think it is better to have prevention rather than cure, and to deter that type of behaviour.

My hon. Friend is making good points about anonymity and innocent until proven guilty. However, with the likes of Harvey Weinstein, it was because of the publicity that victims came forward to prove how big the case was. How do we get the balance right between protecting those who are accused and ensuring that people can come forward if there is enough evidence out there, especially when it comes to the great and the powerful? How do we ensure that the balance is correct for both the victim and the accused?

This is a balanced Bill. It is not just confined to cases of alleged sexual crimes, but applied to crimes in general, because, depending on the status of the person, the allegation that, for example, they are in hock to the Inland Revenue may be incredibly damaging to them. I know that HMRC is compliant with the principle that details about people’s tax affairs should not be disclosed, and that, it is one of the best organisations in meeting those very high standards. Sadly, though, other organisations are not so compliant.

I recognise that there are circumstances in which it is said that, by disclosing the person who is under suspicion, that may lead to other people coming forward. That should not be the case, and it certainly was not in relation to Cliff Richard, Paul Gambaccini and many others. That is why I have set out the exemptions in the Bill. Basically, the main exemption will be where the disclosure is reasonably necessary for the prevention or detection of crime, or for the administration of justice.

I am not saying that the Bill is perfect, but, because we do not have much time to discuss it today, I hope that my right hon. Friend on the Front Bench will agree to have a meeting to discuss it further, because this is a really serious subject. It would be useful to be able to discuss with him where we can go with this. There is much public feeling out there that something must be done. We cannot allow heroes in the country to be brought low by these allegations that then turn out to be false. Having the allegations ventilated in public has caused irreparable damage to the people adversely affected.

Another person who has been the subject of such false allegations is our former parliamentary Conservative colleague, Harvey Proctor. He has been put through the hoops twice on this, although, in the end, he received a pay-out of £800,000 from the police. But who ends up paying that? Of course, we do. Ultimately, his life has been completely wrecked as a result of the false allegations made against him on two separate occasions. He did not have much in terms of resources. He was not in a position on his own to be able to seek redress. I mention his name, because he was not a great star in the media or on television who had resources. Even for Paul Gambaccini, immediately this information came out into the open, he was suspended from being able to do his radio programmes on the BBC. He lost a whole year’s work.

Will my hon. Friend give way?

No, I will not, because I am just about to finish.

In the case of Cliff Richards, the consequences were that his charities suffered to the tune of more than £100,000 a year in lost income while he was under suspicion.

It is with pleasure that I move the Second Reading of this Bill, and hope that, in due course, I will be able to have a meeting with the Minister to discuss its contents.

I congratulate my hon. Friend Sir Christopher Chope on bringing this important subject to the Floor of the House. I also thank and commend all colleagues who have taken part in the debate, including my hon. Friends the Members for Hastings and Rye (Sally-Ann Hart) and for Bosworth (Dr Evans).

In this debate, we have heard about the real human consequences of some of the issues involved, and it is right and proper that we take time on a Friday to debate these matters. The underlying issue is one on which views do vary. My hon. Friend set out his arguments very helpfully. He has drawn attention to the great harm that can be done where people who are investigated by the police in connection with a crime are then not charged or identified as being under suspicion. Although it is often in the particular context—

Ordered, That the debate be resumed on Friday 18 November.