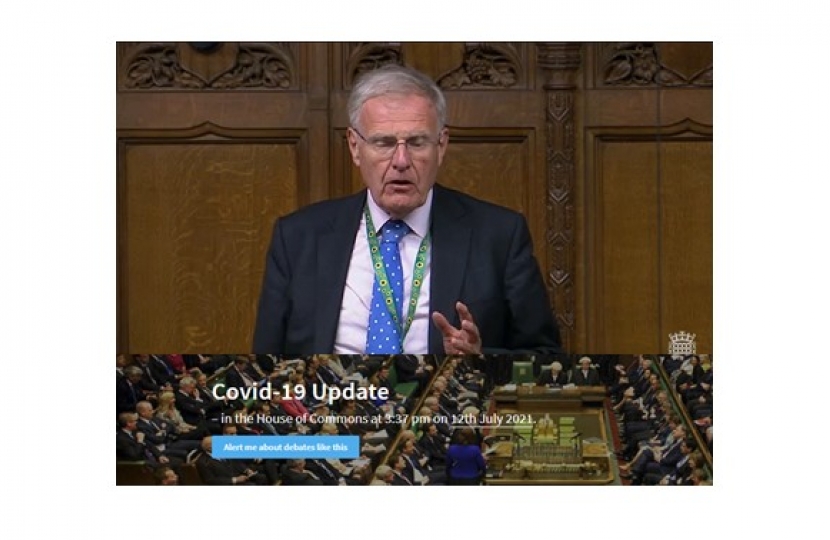 Tomorrow, my right hon. Friend will be asking the House to approve regulations that will put thousands of care workers in England out of a job. Two weeks ago, we were promised that a regulatory impact assessment was available. As of midday today, it is still not available. When will it be available, and why has it not been made available so far?

Sajid Javid Secretary of State for Health and Social Care

I believe my hon. Friend is referring to the measures that the Government have already announced around vaccinations and people who work in care homes. Ideally, I would like to make sure that the impact assessment is available. I do not know the full detail as to why it has not been completed, but at the same time, I think it is important to get on with this part of building our vaccine wall. We will have more to say about it tomorrow.

LATER in the debate

On a point of order, Madam Deputy Speaker. It arises directly out of the response that the Secretary of State gave to me. Tomorrow this House is being asked to approve the Draft Health and Social Care Act 2008 (Regulated Activities) (Amendment) (Coronavirus) Regulations 2021. When that instrument was laid on 22 June, the explanatory memorandum said:

“available from the Department of Health and Social Care…and is published alongside this instrument”.

As of 12 o’clock today, I have been trying, through the good offices of our excellent colleagues in the Library, to get an answer from the Department as to when we are going to get that impact assessment. The officials at the DHSC are quoted by the Library as having said, “The impact assessment has not been laid yet”—we knew that—and, “We will be laying it at the earliest opportunity.” This is very serious, because on 6 July the Secondary Legislation Scrutiny Committee referred to the impossibility of being able to scrutinise the legislation properly without the impact assessment. Despite the Secondary Legislation Scrutiny Committee recommending that the debate be deferred, nothing has happened and all that the Secretary of State said in response to me was, “Well, we don’t know where it is but don’t worry about it—we’ll carry on tomorrow anyway.” That is just not good enough. I would be grateful for your guidance, Madam Deputy Speaker, as to what we can do to ensure that we have an informed debate with the impact assessment before us.

Further to that point of order, Madam Deputy Speaker. In intending to be helpful to those on the Treasury Bench, I have noticed, looking at the said regulations, that they do not actually come into force until 16 weeks after they are approved by the House. It seems to me that in four months there is plenty of time for the Government to produce the relevant information for the House and for the House to take a decision, with no detriment at all to the health and safety of anyone in our care homes.

I thank both hon. and right hon. Gentlemen for their points of order. I am sure the House is well aware that it is not a matter for the Chair. I will not spring it on the Secretary of State for him to give an answer on this operational matter, but Mr Speaker usually observes that it is helpful to the House for Members to have as much information as possible before them when a matter of importance is to be considered.

Further to that point of order, Madam Deputy Speaker. The explanatory memorandum falsely asserted that the full impact assessment is available. Why was the House misled in that way?

Once again, the hon. Gentleman knows that I cannot answer that question, because what is said by Ministers and their Departments is not a matter for the Chair. However, if it were to be the case that a spokesman for a Minister had suggested that something had happened that had not happened, and on which Members were trying to rely and could not rely, Mr Speaker would take a very dim view of that. It is better if Ministers make sure that their Departments give as much information as possible to Members ahead of discussions.

Is it further to that point of order?

It is indeed further to that point of order, Madam Deputy Speaker. I rise to reinforce the point raised by Sir Christopher Chope and Mr Harper. What the House is being asked to decide tomorrow is whether to proceed with compulsory vaccination for a certain section of the healthcare workforce. We have not had compulsory vaccination in this country since the 19th century, when it was tried and abandoned. This is an incredibly serious intervention. Is there a procedure by which the House can delay coming to a decision tomorrow until the assessment is published?

I do not believe there is such a procedure, as the matters on the Order Paper are a matter for the Government. I note that the Lord President of the Council has just come into the Chamber, so he will undoubtedly hear the end of this matter, although he did not hear the beginning of it and so I would not dream of asking him to comment. If the hon. Gentleman is suggesting that a delay should be put in place, I am sure he will be able to make reference to that when he has the opportunity to do so tomorrow.

On a point of order, Madam Deputy Speaker. Will it be possible—will it be in order—to question the Leader of the House about this matter, as he is about to make a statement about tomorrow’s business?

No. The right hon. Gentleman is fond of short questions and short answers, and that is my short answer. The statement that will be made after a brief suspension of the House, which I am about to announce, by the Lord President of the Council, will be, I understand, on a very narrow and specific matter, and I will allow questions only on that very narrow and specific matter. Having said all that, I am quite sure that the Secretary of State and those on the Treasury Bench have taken note of what has been said over these past minutes. [Interruption.] I am pleased to see that the Secretary of State has indeed taken note, so hon. Members have achieved what they set out to achieve. I shall now suspend the House in order that arrangements can be made for the next item of business.